Neem oil is extracted by the intense squeezing of the inner kernels from neem seeds. The oil from the kernels is collected and the residue left over is neem cake. Neem oil is a great all-natural, organic pest control that is safe for use in gardens and around kids, pets, and wildlife.

Neem oil is a great organic pest control solution because it helps controls pests, though some organic gardeners are hesitant about using it. Neem oil isn’t toxic to people or animals, it is even used in certain lotions, shampoos, and even toothpaste. Neem oil is actually very good for your skin and hair. Neem oil isn’t usually used in large quantities in these products because of its smell. It smells like a combination of sulfur and garlic.

It is completely non-toxic to birds, wildlife, pets, people, pollinators, and other beneficial insects. Insects must eat the plant to be killed. So beneficial insects that control pesky bugs such as mantises, spiders, and ladybugs won’t be affected by neem oil. Many times the neem oil repels the insect from eating at all and because of the hormonal effect, leaf eating and sucking bugs won’t even eat anything and will eventually die.

The smell of the oil is enough to repel most insects so they don’t even come near your garden or plants. Neem oil also contains azadirachtin, which is the main active ingredient. Azadirachtin reduces the feeding of sucking and chewing insects. It will also interfere with the hormone systems of certain insects, making it harder for them to grow and breed.

Other components contained in neem oil will kill insects by making them unable to eat. Plants can even absorb the neem oil into their systems and it will begin to act as a systemic insecticide. This makes plants even more resistant to pests. 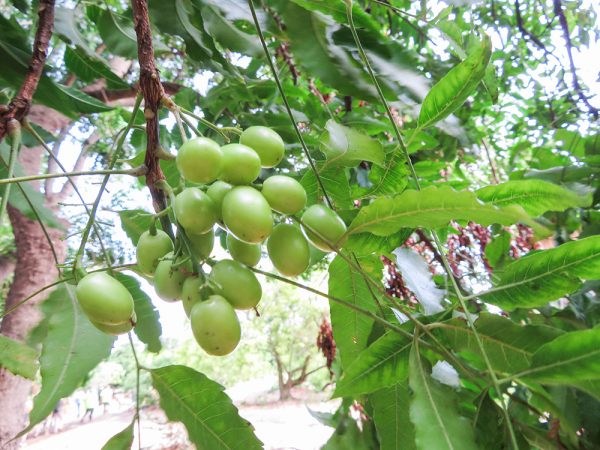 Seeds on a neem tree for making cold-pressed neem oil

How to use neem oil

The best way to use it is by making your own spray. You can fill a large 24-32 ounce spray bottle with warm water, then add 3 teaspoons of neem oil, and 1 teaspoon of unscented castile soap. Spray this solution on your plants and garden in the early morning or later afternoon or evening. Beneficial insects are most active during the middle of the day so applying it at these times gives the solution time to dry and then will only affect the chewing and sucking pests. Once it dries it won’t harm bees, spiders, mantises, lacewings, and such.

Our neem oil is cold-pressed with no solvents used and nothing is taken out of it. It is simply cold pressed and put into 55 gallon drums which we import straight from India. Much of the neem oil found in garden centers has been cut (stuff extracted out of it). Ours is uncut and unprocessed cold-pressed premium neem oil.